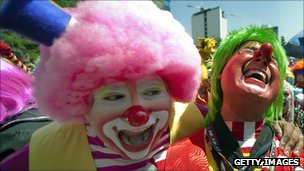 Could laughter be the glue that welds human societies together?

A good laugh can help the body relax and ease the pain, that is really an amazing thing. Laughter “may be the best medicine?“

According to the researchers at the University of Oxford, belly laugh was unique to early humans and motivated our ancestors forming much larger tribal groupings than ape-like species around them.

The research is published in the Proceedings of the Royal Society B.

The experimenters first tested the pain thresholds of volunteers.

They were then split into two groups, with one being shown 15 minutes of comedy videos, while the other was shown material the researchers deemed boring – such as golfing programmes.

The researchers found that those subjects that had recently experienced belly laughs were able to withstand up to 10% more pain than they had done before watching the videos.

To their surprise, the scientists also found that the other group was less able to bear pain after watching 15 minutes of the “boring” programmes.

The type of laughter was also important. Tittering and giggling did not elicit any physiological effect; only a good guffaw did the job. 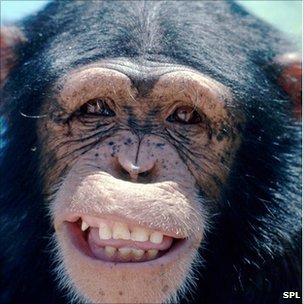 Other apes can laugh, but only humans can guffaw

“It’s the emptying of the lungs that causes [this effect],” he told BBC News.

“It’s exactly what happens when we say ‘I laughed until it hurt’. It seems to be extremely painful and it’s that pain that produces the endorphin effect.”

However, not all the comedy programmes were able to hit the spot, according to Prof Dunbar.

Slapstick humour seemed to score highly whereas clever stand-up comedy routines, though found to be enjoyable, had no effect on raising pain thresholds.

“I hesitate to say this but we did have one series with [British stand-up comic] Michael McIntyre and we thought he’d go down really well – but it seemed like his humour was too cerebral to produce serious guffaws,” Prof Dunbar explained.

“Things that worked very well were slapstick comedies such as Mr Bean.

“Situation comedies such as Friends also seemed to be particularly successful.”

The researchers were not able to measure endorphin levels directly because that would have involved extracting fluid from the volunteers’ spines using a long needle – a process which, Prof Dunbar concedes, would quickly take the smile off their faces and possibly influence the results.

Instead, the researchers took what they referred to as a proxy measurement, which tested the pain threshold for each volunteer.

This involved, for example, placing a bag of ice on their arms to see how long they could withstand it.

The aim of Prof Dunbar’s study is not to develop a new treatment.

Instead, it is to explore the role of laughter in the establishment of human societies two million years ago.

All apes are capable of laughter, but it is only humans that are able to belly laugh and so release endorphins.

“Laughter struck us as such an odd thing,” he said.

“We spend so much of our time in conversations trying to elicit laughter and laughing ourselves [so] it looked like the first port of call.

“At this point what we’re trying to show is, yes you do get endorphin activation.

“The next stage will be to see whether laughing really allows groups to bond together and work as a group better and act more generously towards each other.”

This theory creates the scenario of our ancestors sharing laughter around the fire, possibly the emergence of the first clowns, clubbing each other for comic effect.