Accordingly, the U.S. Centers for Disease Control and Prevention suggests children as young as six months old got flu shots, yet less than a quarter of the 74 children over age six months who died between September 2010 and August 2011 had been vaccinated. 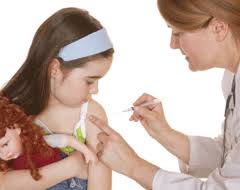 The CDC said parents often mistakenly think healthy children can survive a bout of the flu, but that is not always so.

Among the deaths, detailed in the CDC’s Morbidity and Mortality Weekly Report, released on Thursday, about half of the children found died had no prior medical condition that would put them at increased risk of flu complications.

The researchers said the more young children are, especially those between the age of 2 and 5, the higher they are at risk of catching flu.

Among the 57 children who did have a medical condition, over half had a neurological disorder, 30 percent had pulmonary disease, 25 percent had a chromosome or genetic disorder and 19 percent had congenital heart disease or other cardiac disease.

Only half of the 94 children who died in the hospital were given antiviral drugs, such as Tamiflu. Since the 2009 H1N1 swine flu pandemic, the CDC has recommended immediate treatment with antiviral medications in patients with severe flu symptoms.

“We know the flu vaccine isn’t 100 percent effective, especially not in children with high risk medical conditions,” Finelli said in a statement.

“That’s why it’s essential that these two medical tools be fully utilized. Vaccinate first; then use influenza antiviral drugs as a second line of defense against the flu. Right now we aren’t fully using the medical tools at our disposal to prevent flu illnesses and deaths in children.”

Even though the circulating strains of flu have not changed since the 2010-2011 flu season, the CDC recommends all Americans over the age of six months get flu shots — even those who got flu shots last year against the same flu strains.

This year’s vaccine protects against H1N1 swine flu and two other flu strains called H3N2 and influenza B.

(Reporting by Julie Steenhuysen in Chicago; Editing by Cynthia Johnston)